Getting to Vienna is no piece of cake!  I left Dallas at 8 pm on Friday, arriving nine and a half hours later at London's Heathrow Airport.  The plane was freezing cold, and I kept dozing off and on, maybe sleeping about three or four hours at most.  I sat by a nice Irish guy, who was flying home after working in Fort Worth for the last few weeks.  London is six hours later than Dallas, so we arrived around noon.  The jetway had no power; they brought stairs out for us do use in deplaning.  We then caught a bus to the terminal.   From there, it was on to my connecting flight, but first I had a three-hour layover before departing for Vienna.  I used the time wisely:  shopping and watching people.  My Vienna flight was short (two hours) and only about half full.  We landed just as the sun started going down.  It's amazing the photographs you can take from a plane's window! 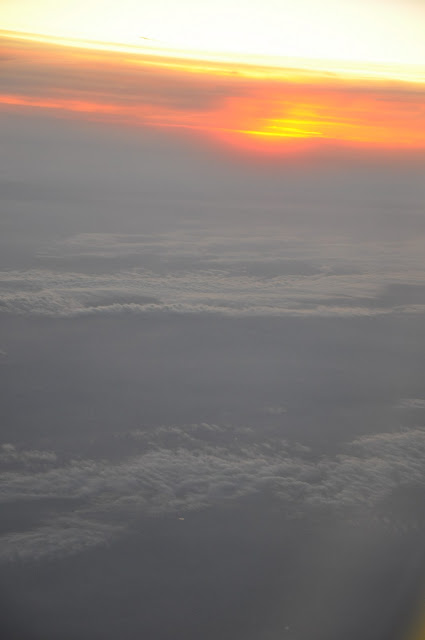 I trudged to baggage and picked up my luggage, before locating the driver from the hotel.  He was right on time, and we sped off to the city.  Traffic was heavy, and it it took over half an hour to reach the Hotel Alstadt, ﻿arriving a little after 7 pm on Saturday.  What a journey!  The hotel is very cool.  Here's a self-portrait... 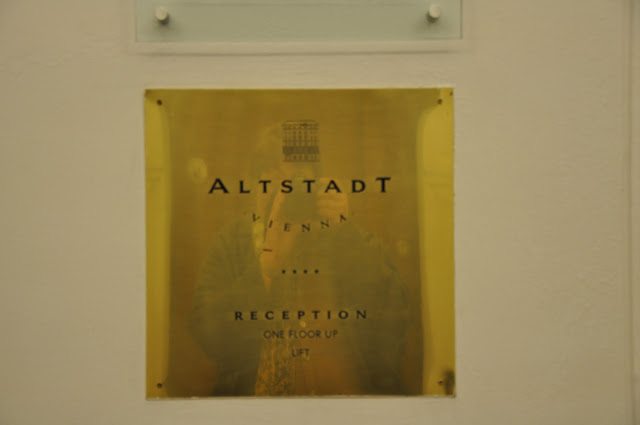 This is a small hotel, only fifty rooms, and an unusual mix of traditional and modern decor.  I like it. 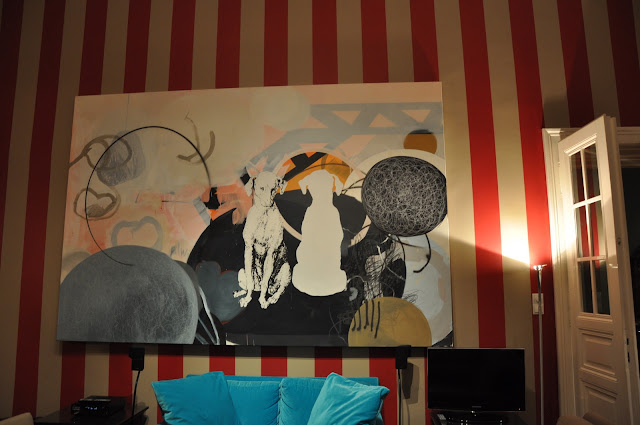 The hallways are gorgeous!  Everytime you turn a corner, the decor changes. 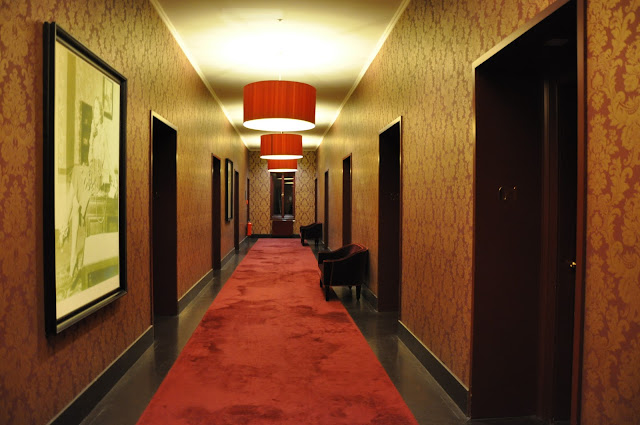 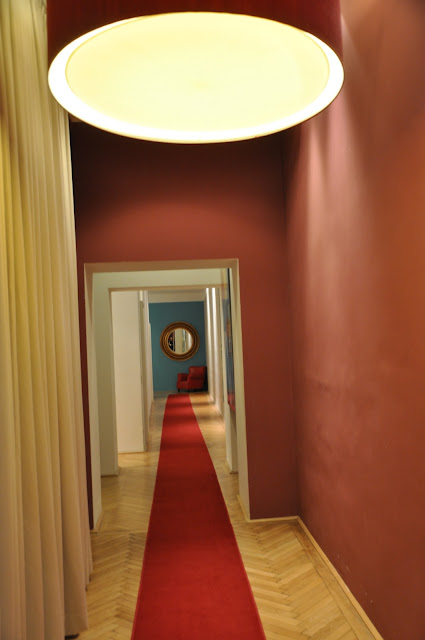 I was really happy to finally get to my room.﻿ 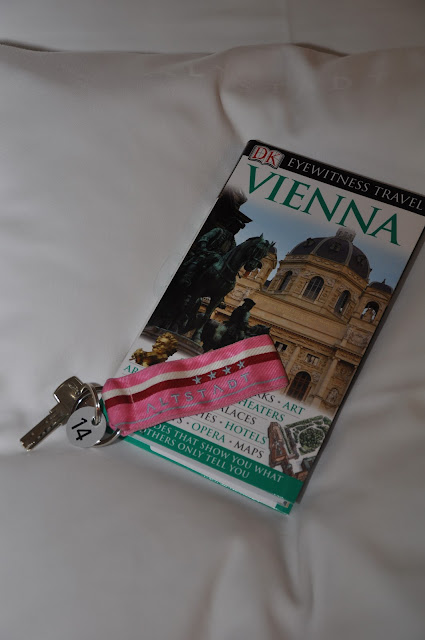 Not too sure about the painting on the wall!﻿ 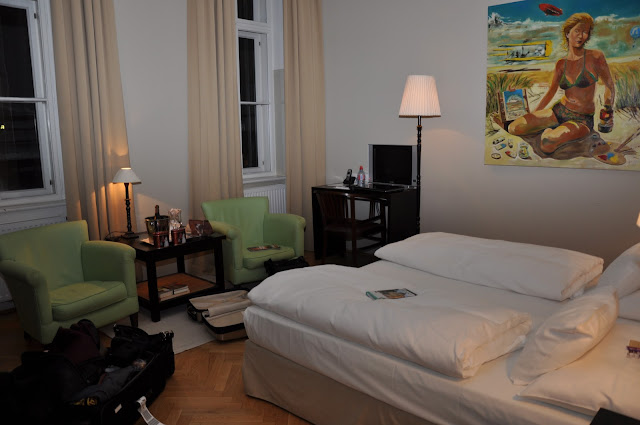 The hotel offers a wide variety of newspapers. 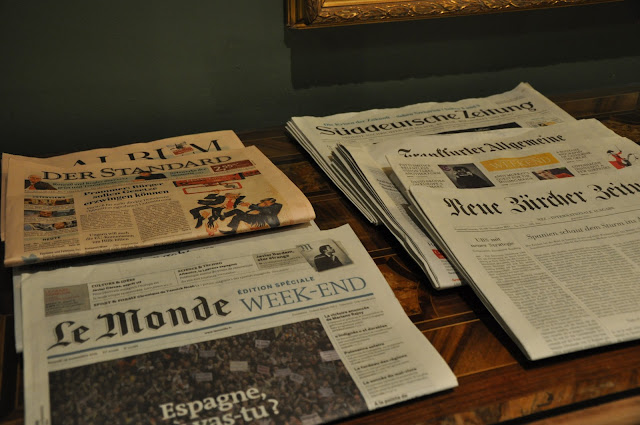 There are several rooms where breakfast is served each morning﻿ 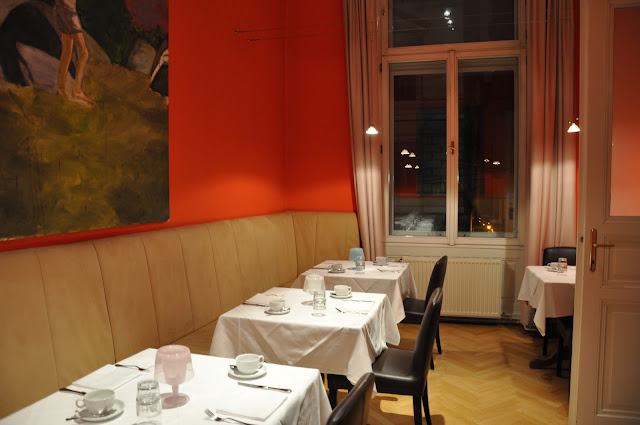 Nancy's room is right down the hall from mine, so I was able to knock on her door almost immediately.  We walked down the street to a Christmas market area, and had dinner in a small restaurant.  It was very good:  pork and sauerkraut and bacon, as well as a bit of gravy and some sort of large dumpling.  Good thing I'm only here for a week!  The Christmas market was closing down for the evening, but we'll check it out tomorrow, when I have more energy.
In the meantime, I'm jet-lagged to the nth degree, and am off to bed.  See you tomorrow!﻿
﻿
﻿
Posted by Vickie at 4:24 PM