In the spring of 1980, I walked around with my hands gently resting on my belly.  Yes, I thought, it's going to be a girl.  And it was.  I had no clue how to raise a child.  It was trial and error all the way, but I must have erred in the right direction because Krista was one heck of a kid.   We made it through high school and college before she moved to Portland.  A yoga instructor, both graceful and strong, I am beyond proud of her.

When Krista first starting dating Tony, I asked her if he might be "the one."  She replied "yes" so quickly that I wasn't even sure she'd heard the question.  It was the correct answer though, because he proposed to her on her birthday this year.  I flew to Portland last week on my birthday to help her find a wedding dress. It was the best birthday I've ever had. We spent several days searching, but, yes sir, we got the job done.  I can't express how I felt watching Krista slip into gown after gown, pirouetting around the dressing rooms with a smile on her face.  Of course I had to capture the days in pictures, and while I'm sharing some of them, the dress she selected is not shown, and won't be until she's married.   She eventually said yes to the dress at an enchanting boutique called called The English Dept.

My cousin Rose recently married her sweetheart, Davis.  There's nothing like a family wedding, where everyone can get together, and be in one place where two people are, at that moment, the happiest people on earth.  My father, aunts, uncles, cousins, second cousins, and friends were there. Even though it was almost 100 degrees, and the wedding was held outside, we all survived.  In fact, we had a divine time! Doesn't Rose look downright radiant?

Here's Rose with her kids.  As you can see, it was a wonderful evening for some family photos, and I was honored to take them.﻿
Rose and Davis made it look easy.  At least they didn't appear nervous!
Pardon me if I brag on my family.  Rose's sister, Sherry, makes the most delicious wedding cakes and grooms cakes I've ever seen.  Here she is with the wedding cake she baked for her sister.  And, yes, it was as good as it looked!
The South is known for its groom's cakes.  The grooms get a whole separate table with their own cake on it.  Maybe some of you remember the movie "Steel Magnolias," with the gray armadillo groom's cake, complete with red velvet cake inside?  Well, Davis chose a table of cheesecakes, with fresh blueberries and strawberries.  Sherry baked those, too.
﻿Did I mention that she also catered the wedding dinner?  Yep, she's got buckets full of talent.  My cousins Kathy and Diana Gayle made the bride's bouquet.  When the roses were delivered without any greenery two hours before the ceremony, they were unfazed.  Slipping on some stylish hats to protect their sweet faces from the harsh June sun, they rummaged around in my Dad's garden, until they found what they needed.
They came back with some green leaves, a few gardenias, and some other unknown greenery, and, as I watched, they transformed it all into a perfect bridal bouquet in minutes. They even made up the buttonaires for the men!
The bride's mother, my Aunt Flo, has a cousin, Gloria, who offered up her house and yard for the ceremony.  It had a front porch that was perfect for the wedding, and a huge back yard that was good for entertaining a couple hundred of the bride and groom's closest friends and family.
Of course, there needed to be a lot of room just to accommodate all those Cunninghams!﻿
Here's Uncle Olan and Aunt Flo, the parents of the bride. Aren't they cute as can be?﻿
The ceremony was short and sweet.
It was, however, just long enough for some of the cups to start to melt...﻿
﻿The bride and groom made it a point to stop by every single guest table.
While they did that, I had time to take advantage of the wooded background for more family photographs.  My cousin Debbie's girls are so beautiful!﻿
My cousin, Sabrina, is the official cake cutter at these affairs.﻿
The bride and groom did a pretty good job of getting it started, though.
This is Jess, the groom's daughter, in her extra pretty fancy dress.﻿
I guess if you're a Great Pyrenees, and you live in Alabama, you look forward to your summer hair cut!  This little guest fell in love with the pups, who enjoyed all the attention.﻿
The groom's best friend got ordained on the internet, so that he could marry Davis and Rose.﻿
As some of the older people started to leave, Uncle Olan volunteered to drive them back to their cars in the golf cart.﻿
The family, though, stayed on 'til the end.
Before I knew it, the evening was gone.  I packed up my camera equipment, and slipped away. The moon was shining, and the countryside was quiet.  Best of luck to Rose and Davis.  I love you both.
﻿
﻿
﻿
﻿
﻿
﻿
﻿
﻿
﻿
﻿
Posted by Vickie at 7:34 PM No comments:

I'm Not Mary Chapin Carpenter, But I Feel Lucky...

Several days ago,  I drove through Hackleburg and Phil Campbell, two very small communities that were destroyed by one of over 100 tornadoes that swept through Alabama on the afternoon of April 27, 2011.  This tornado was particularly deadly, cutting a swath through the countryside, stripping bark from the hardwood trees that are so prevalent here, with winds of over 200 mph. The tornado first touched down in Hackleburg (population approx. 1,500), where 29 people were killed.  It then continued on to Phil Campbell (population approx. 1,000), killing 18 more.  I had never been to either town, but it was shocking to see the devastation almost two months later. This is what's left  of one of the  residential streets in Hackleburg. 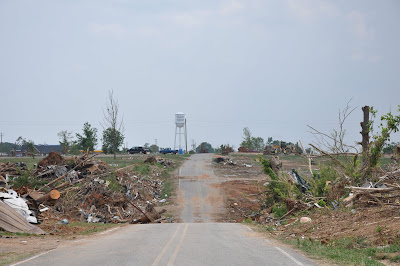 I went inside this house, but there was so much glass on the ground, I didn't stay long.  It was totally destroyed, and the owners must have moved on, leaving what remained behind.  A cat ran through what was the back door, when I walked in. 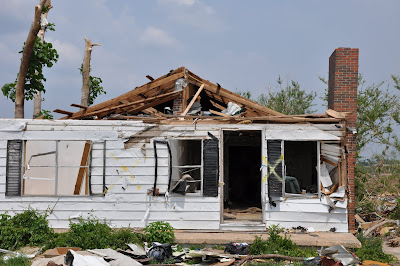 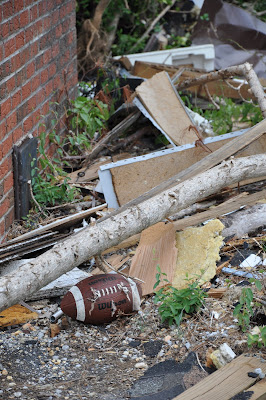 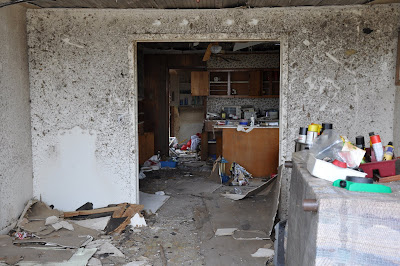 There was a stuffed bear under some debris on a couch. 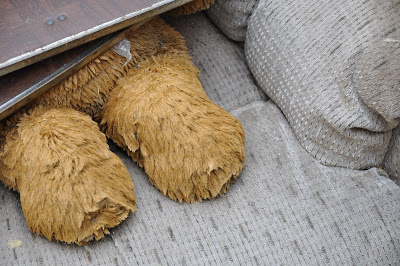 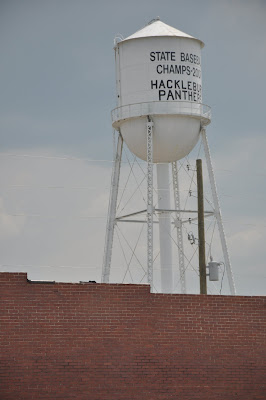 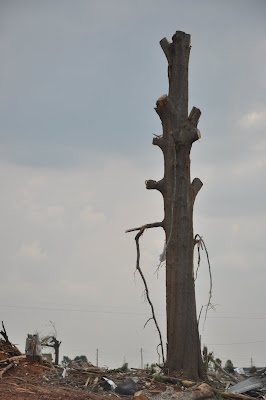 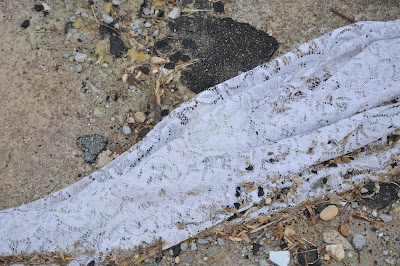 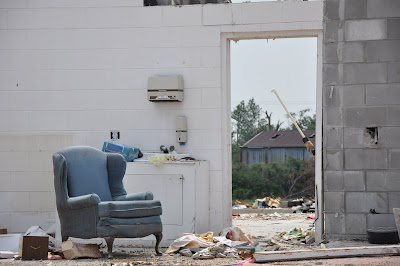 When I stepped out of my car, the first thing I noticed was the sound of heavy equipment and saws.  The air was heavy with humidity, and the smell of wood.  There is so much work left to do, it's mind-boggling, but that's what people were doing, in the 98 degree sun.  Where this house once stood, the only things recognizable were an artificial Christmas tree and a broken piece of costume jewelry.  A man walked slowly around the debris.  I said, "Isn't this just the worst thing ever?"  He gruffly replied, "No ma'am.  The worst thing is my Mama dying here." 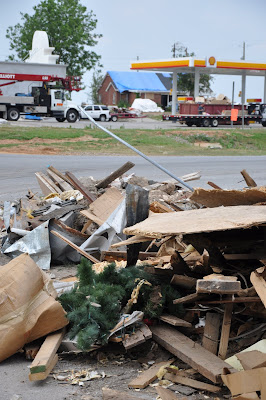 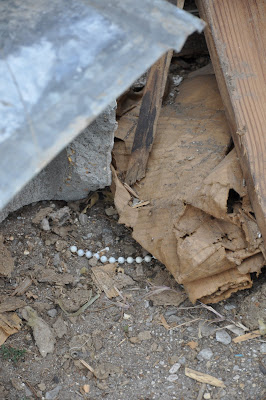 Many trees in this area were old and stately.  The tornado uprooted them with ease, this one larger than my car. 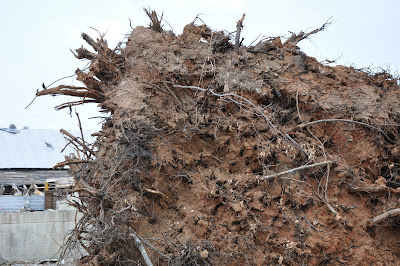 The little town of Phil Campbell is only a few miles up a beautifully winding country road. If possible, it looked worse than Hackleburg.  Upside down vehicles dotted the landscape.  Trailers never stood a chance. Trees were bare.  On one lot, the house was completely gone, but there was a dog house left standing. 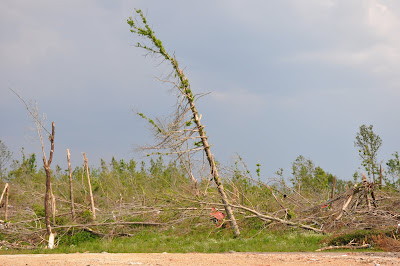 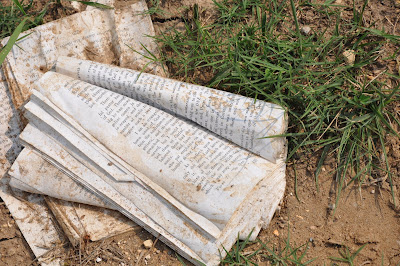 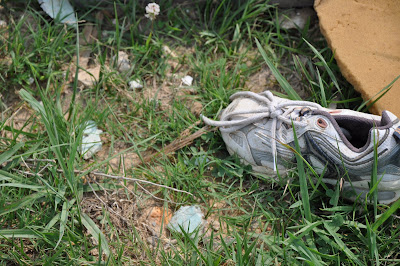 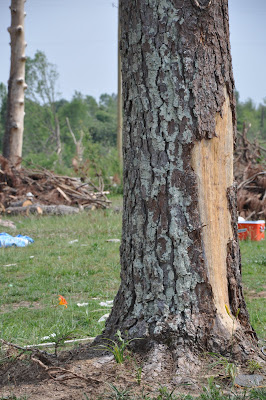 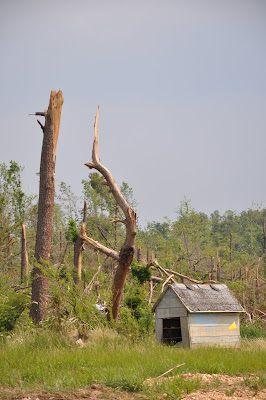 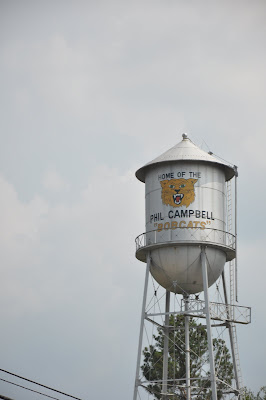 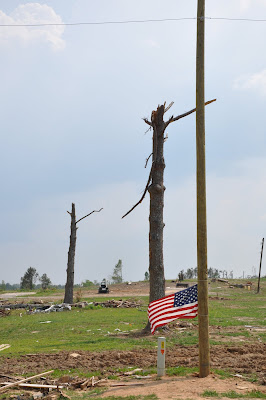 The press wasn't in either town.  I was the only one with a camera.  Everyone was busy rebuilding schools, churches and homes.  I guess it was considered old news...that is, to everyone except those who lived there, and those who still do.  It started to rain as I headed away from the damage.  I felt guilty.  I felt blessed.  But most of all, I felt incredibly lucky.﻿ 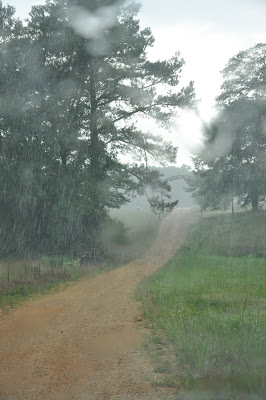